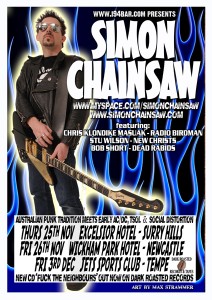 Formerly frontman for ‘80s Sydney underground legends the Vanilla Chainsaws, Simon has spent the last decade serving up a unique brand of rock ’n’ roll, playing and recording all over the world. He has released four CDs and a further four CD box set of different material under his own name.

It culminated in 2010’s best of/retrospective release “Eight Times Lucky” and European and South American tours to support the release. 2010 has been a great year for Simon Chainsaw and he’s coming home for a brief run of gigs in November-December that will be his first in Australia.

To coincide with the tour, Simon will launch his sixth solo release “Fuck The Neighbours!” In some ways it’s his “garage days” album where Simon pays tribute to Aussie ‘70s punk bands. Simon revisits 18 Oz punk classics and obscure gems and in a strictly limited edition of 450 hand-numbered copies.